Did Gene Kelly Have Any Children? 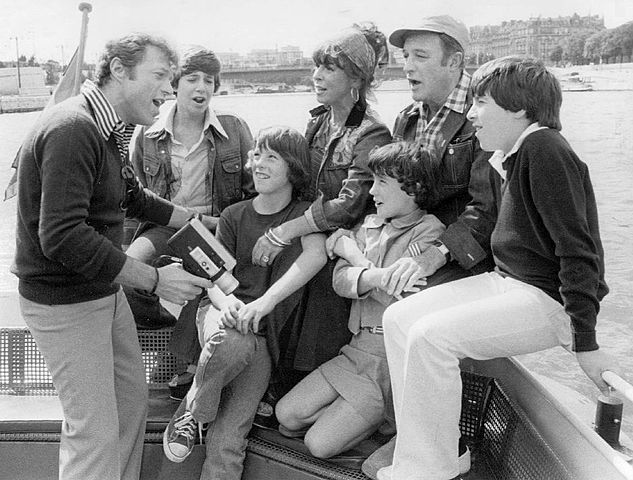 Steve Lawrence, Eydie Gorme and their two sons with Gene Kelly and his son, Timothy, and daughter Bridget, 1971. Credit: Wikimedia Commons.
Gene Kelly had three children. ​His first was a daughter, KERRY, born in October of 1942 to Gene and his first wife, Betsy Blair.

​Although likely exaggerated (as fanzine interviews typically were/are), the Photoplay article "My Kids, The Kellys" (Feb. 1949) discusses young Kerry's relationship with her father:

And with all of this Gene is great fun, too. He and Kerry sing together all the time. At five, Kerry knows the words of at least a dozen songs she's learned from Gene. And sings them like Gene. And looks just like him, Gene's eyes, his mouth, his mannerisms, and light as spindrift on her feet. I think Kerry is one of the luckiest little girls in the world.

In this Person to Person interview with Edward R. Murrow (1958), Gene shows off a picture that Kerry, at age nine, drew for him (about 3 min in).
As of this writing, Kerry and her husband work as child psychologists in Michigan. Recognized for founding the Allen Creek Pre-School, a laboratory for integrating psychoanalytic insight with early childhood education, the couple has co-authored several books: For more on Kerry's take on her father and his career, listen to her interview with Stephen Bogart (Humphrey's son) on Icons Radio Hour and/or check out PBS's American Masters special, Gene Kelly: Anatomy of a Dancer.

Gene's second child and his first with Jeanne Coyne, is TIMOTHY. He was born in March of 1962. Biographer Clive Hirschhorn documents how Gene apparently heard about the pregnancy:

While Gigot (1962) was being made in Paris, Jeannie became pregnant and informed Gene of the fact by sending him a birthday card which simply told him that she had his present inside her. (Hirschhorn)

Tim went to the University of Southern California's Film School and perhaps still works in the film industry.

​In an interview for People magazine (1984), Tim opens up about his father, including their similar physical characteristics: "Our shirt, sleeve, neck, shoulder size, everything is the same. It's amazing. I had the greatest black loafers of all time. Boy, I miss those loafers." (The loafers, along with many of the family's possessions were lost in a house fire.)

Gene's third child is BRIDGET. She was born to Gene and Jeanne in 1964. Again, Gene recalls the occasion in Hirschhorn's biography:​​

I was in the Cedars of Lebanon hospital waiting for Jeannie to give birth, when I received a phone call from a well-known newspaper columnist who congratulated me on becoming a father again and what, he wanted to know, did I have to say for myself? Well, I had no idea Jeannie had already delivered, and wondered how the hell the guy had heard before me! I knew it was impossible to keep a secret in Hollywood, but this, I thought, was ridiculous!

Bridget attended college in Paris and lives with her family in Montana.