Did Gene Kelly Star in Any Non-Musical Pictures?

By Kelly
This post is part of the series Gene Kelly: The Basics, which addresses fundamental questions fans often ask about the star. 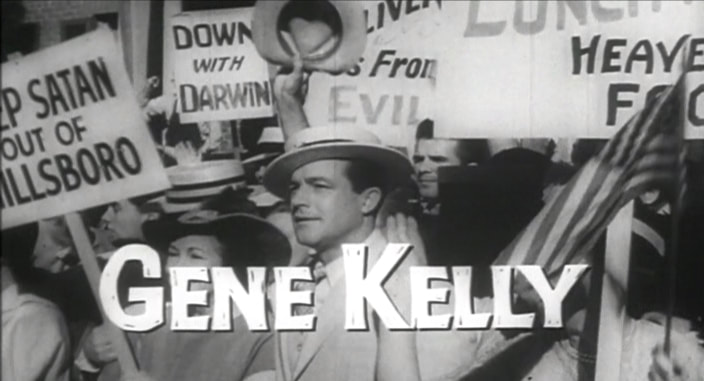 Screenshot from the trailer to Inherit the Wind, Wikimedia Commons.
Yes, Gene Kelly stars in many non-musical pictures. He may be most widely known as a song-and-dance man, but his "straight pictures" (i.e., no singing or dancing) are just about as numerous. In total, not counting the TV productions, he stars in 14 non-musical pictures.

Part of why the studio commissioned Gene to star in non-musical pictures was to get its money’s worth out of him. It made no economic sense to pay a star if s/he had no work to do. There was not always a musical available for Gene and, besides, he also found value in straight pictures.

Gene’s notable non-musical pictures include
The Cross of Lorraine is about French soldiers captured by the Nazis and their time spent in a POW camp in World War II. Viewers will find a small history lesson in the form of the French resistance, as well as in the conditions of the camp. (It is not a topic to be taken lightly, but fans take note: Gene looks incredibly sexy with mussed hair and a scruffy face!)

The title Christmas Holiday suggests a cheery film with Gene “rockin’ around a Christmas tree,” but don’t be fooled. This is, instead, a film noir co-starring Deanna Durbin, who plays as much against type here as Gene. This is the only film in which the music stops when Gene steps onto the dance floor.

Gene brings much life to Living in a Big Way. In terms of being a non-musical, it is confusing: there are a couple of musical numbers, but the film is not considered an outright musical. The first number features Gene dancing with his leading lady, Marie McDonald. Gene also dances with both a dog and a statue (yes, a statue) in the second number. The third number, an addition to the picture, is considered the highlight of the film:  Gene joins a group of children on a construction site and performs stunts usually reserved for acrobats.

The Three Musketeers is a bigger budget film, and the first one from this list shot in Technicolor. Gene’s athletic skills are in great display and prove that dancers can bring out the moves just as well as any athlete. Lana Turner, Van Heflin, and June Allyson are his costars. (Another heads-up: this is the only Hollywood film in which Gene appears shirtless for a moment.)

Marjorie Morningstar features Natalie Wood as Gene’s leading lady. The film is about a summer romance that takes place largely at a summer resort (a sort of precursor to Dirty Dancing). Gene plays Noel Airman, the social director for the camp, who woos a naïve, young Natalie with his song “A Very Special Love.” Read up on the other similarities and differences between MM and DD here.

Finally, Gene acts alongside Spencer Tracy and Fredric March in Inherit the Wind. The plot is based off of the famous Scopes “Monkey” Trial, in which a schoolteacher is accused of promoting the theory of evolution. Gene’s character, E.K. Hornbeck, is the cynical newspaperman who is drawn to the town to report on the trial, as well as the antics of the townspeople.