Thank You, Gene Kelly, for Not Directing Cabaret

Gene Kelly as the director (rather than co-star) of Cabaret seems tenable—or does it? — BY KELLI 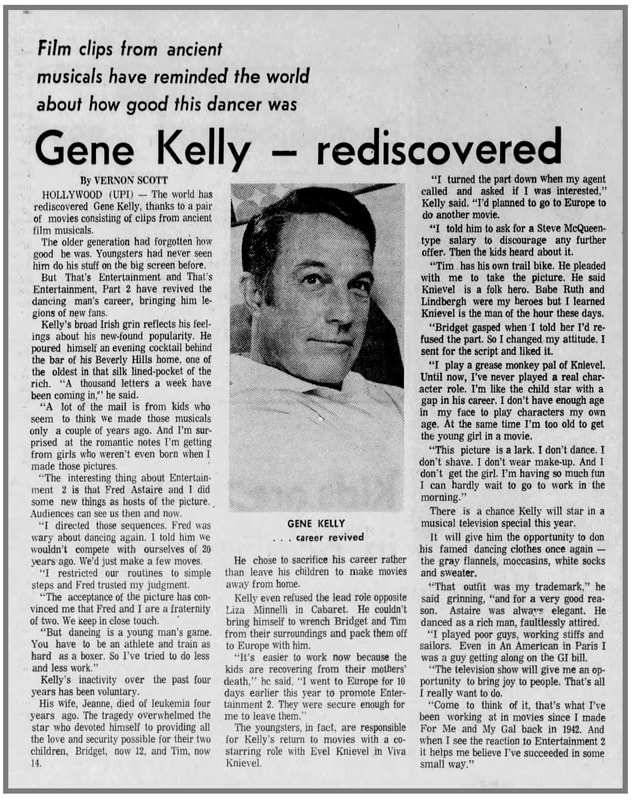 The Vancouver Sun, 26 Jul 1976, Page 19.
In 1976, Gene Kelly discusses his return to movies. After the death of his wife Jeanne Coyne, Kelly turned down virtually any project that would take him away from the couple’s young children, Tim and Bridget. At this point, single fatherhood was his life. ​​

But with the blessing of his kids, Gene Kelly returned to the screen in the role of Evil Knievel’s “grease-monkey sidekick” in
Viva Knievel (1977). (Further reading: Viva Knievel in the AV Club's series “Films That Time Forgot.”)​

Curiously, this interview also mentions that Kelly turned down the lead role opposite Liza Minnelli in Cabaret because he did not want "to wrench Bridget and Tim from their surroundings and pack them off to Europe with him.”

​Hmmm, ​Gene Kelly as Joel Gray’s Master of Ceremonies or Michael York’s bisexual character, Brian Roberts? With Kelly around the age of 60 at this time, neither role seems plausible. 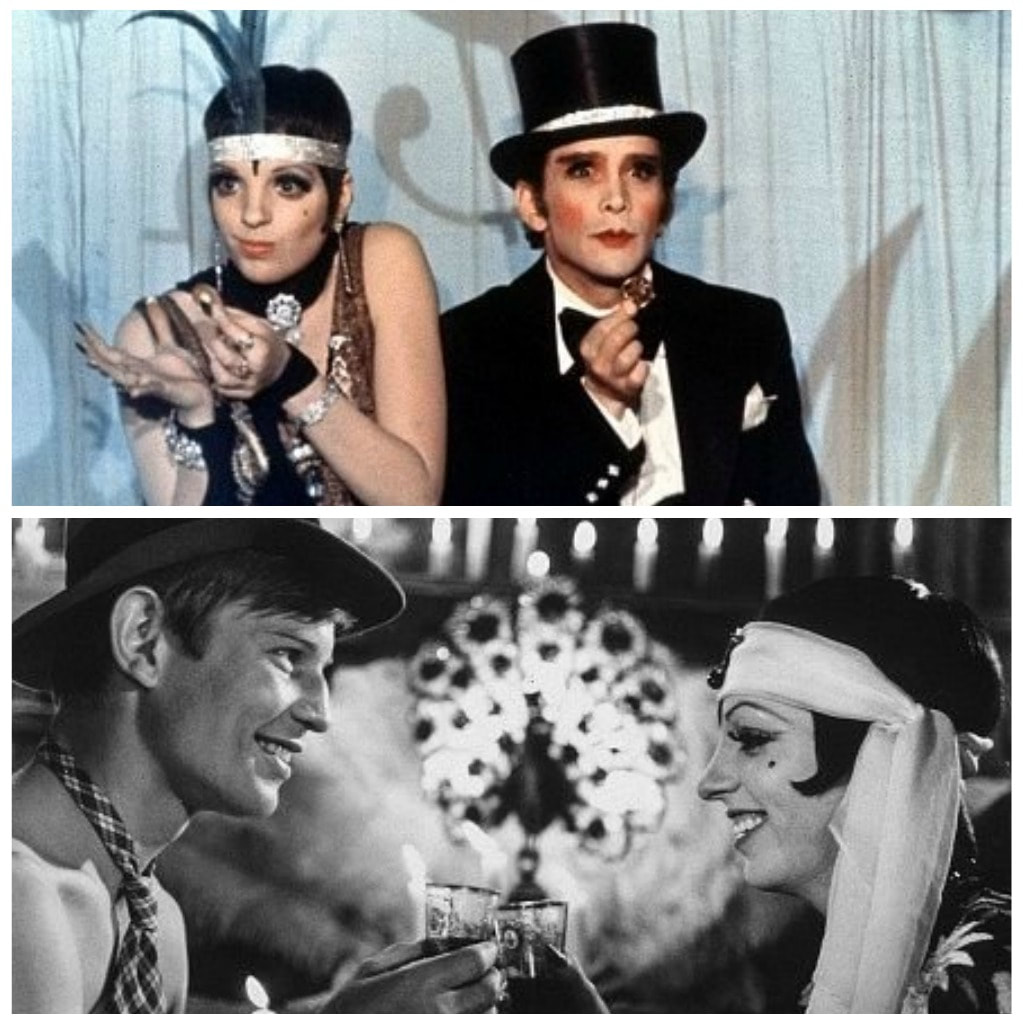 Liza Minnelli with Joel Gray and Michael York in Cabaret.
Thankfully, further research--including the documentary Gene Kelly: Anatomy of a Dancer and the book The Secret of Their Success--indicates that Kelly was asked to direct Cabaret (1972), not co-star in it. It seems the studio initially wanted a recognizable name behind the camera. Choreographer Bob Fosse would eventually get the job.

​Here's Kelly, late in life, talking to
Burt Prelutsky about the matter​:

“I regret that I couldn’t get to direct and choreograph [Cabaret], but did recommend to the producers that they go with Bob Fosse, who wound up winning the Oscar. I honestly don’t think I or anybody else could have done a better job.”

​Yes, Gene Kelly as the director (rather than co-star) of Cabaret seems much more tenable. Or does it?

Indeed, these “lusty musicals,” as Kelly Kessler calls them (10-11), are much more ambivalent in their form, narratives, characters, and morals than the unified, idealistic studio-driven musicals in which Gene Kelly starred as well as those he directed later in his career like Hello Dolly! (1969) and That’s Entertainment II (1976).

​For example, first, in these 1970s musicals, sex is no longer implied but simulated—or at least thrown more explicitly into the viewer’s face. Second, heterosexual coupling, a mainstay of classical film musicals, is not necessarily the norm. Third, drugs, skimpy costumes, and choppy editing supplant the bright white sets, elegant top hats/tails, and gliding camerawork of the classical period. Therefore, it would arguably seem out of character for Gene Kelly to have directed Cabaret, not to mention perhaps outside his expertise.

I suggest these things about Gene Kelly as a compliment, not an insult. Arguably an auteur (at least a “performing auteur”), Gene Kelly possesses a defining style both behind and in front of the camera that does not necessarily jive with the tone, music, or storyline of a musical like Cabaret—and that is okay.

Fortunately for us, Gillian Kelly has pared down Kelly’s auteur personality to three elements: 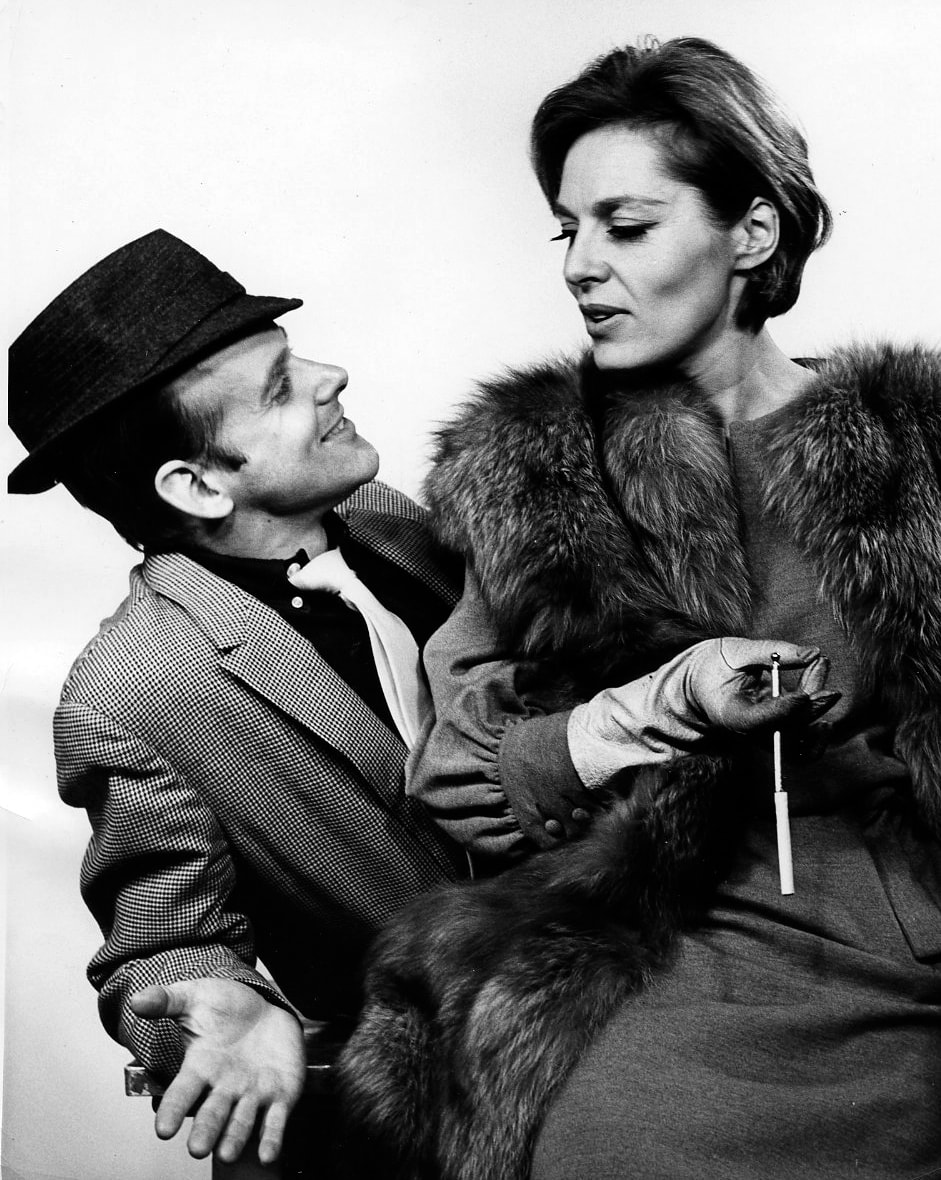 Bob Fosse and Viveca Lindfors 1963. Wikimedia Commons.
Certainly, Gene Kelly had the technical skills to direct Cabaret. But the sensibilities to produce a 1970s musical “game-changer”? Maybe not. And again, that’s a good thing.

Where Singin’ in the Rain (1952) and On the Town (1949), for example, soared because of Kelly’s and Stanley Donen’s creative direction, jubilant mise-en-scene, and tight control
, Cabaret succeeds because of Fosse’s stylized and cynical sexuality, jazz hands, and gritty sets. Different styles, different auteurs, different types of films. And once more, that's okay.